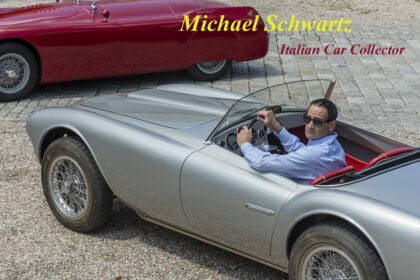 Story and photos by Sean Smith

Italian car collector Michael Schwartz has been named this year’ Honored Collector, a feature of the The Lime Rock Historics, which will be held Thursday, Aug. 29 – Monday, Sept. 2, 2019. Last year’s Honored Collector was Peter Mullin, who brought several rare Bugattis to Lime Rock.

But this year it is the Italian cars that will make the weekend. “We are delighted to announce New York City’s B.Z. and Michael Schwartz as the honored collectors at this year’s Historic Festival,” said Kent Bain of Automotive Restorations Inc. administrator of Sunday in the Park.

The eleven car collection features a Cisitalia 202 Mille Miglia Nuvolari, two Lamborghinis, a Stanguellini, a Siata 208S, and an Alfa TZ1. Last weekend, Michael allowed us to photograph three of his favorite cars from his collection as seen below.

Schwartz’s love of cars began with his dad, a true car enthusiast. Young Michael remembers going on outings with him to see the new Cadillacs when they would arrive in the showrooms. So much was his love he would take a day off from work to visit the new cars. It was like a vacation for him.

As he grew Michael also became interested in art, film and culture, with a great love of Italian films of the late 40s through the 60s. He also became a contemporary art collector and it dawned on him that the Italian cars he so loved were rolling pieces of functional sculpture.

This gave him the theme for his automotive collection. He didn’t want to collect all sorts of automobiles; he wanted the cars to have a common thread. Naturally, it would be post-war cars from Italy. It was the romance of the beautiful life of Italy that drew him in. It was also the technical design, the hand-built quality and the amazing beauty of the machines from that country that grabbed him.

The first car in the collection was a Maserati Mexico that is still with Michael today. Schwartz admits it was a rocky start; he made every mistake possible when buying an Italian car. He bought it sight unseen out of Hemmings as it had a wonderful description. But it took a number of different restorers to make it work, finally, it came under the care of Kent Bain and Automotive Restorations where it was turned into a fully functioning car, deserving of the name Maserati.

While the Maserati was being made right, he read an ad in the paper regarding an Alfa Duetto being sold by a Harvard graduate student. Michael and his wife took the train to New Haven, bought the car and drove it home. It was just a total pleasure. It became a fun experience to own an Italian car.

Michael bought a house and he kept collecting and ran out of space, so another house was built along with a special garage for the collection. And again he is full up.
The collection covers everything from the grandest of GT cars to the smallest displacement sports and racing cars. With the turn of a key you have a 4, 8, or 12 cylinder operas being played for you. Each car was chosen for their different driving experiences and on a beautiful day drive them he does.

Like children Schwartz doesn’t really have a favorite, maybe the one that starts that day.

Said Kent Bain, “They have been supporters over many years and their cars have found recognition and award at past Sundays in Lime Rock Park on several occasions. When we selected Italian Masterpieces as our theme for this year, we had hopes that Michael and B.Z. might play a role. Exceptional sporting and touring machines of post war Italian origin are the focus of the Schwartz collection.”

What you can read next 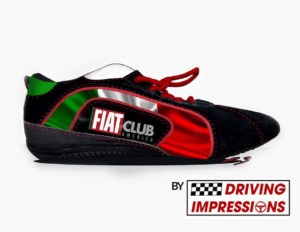